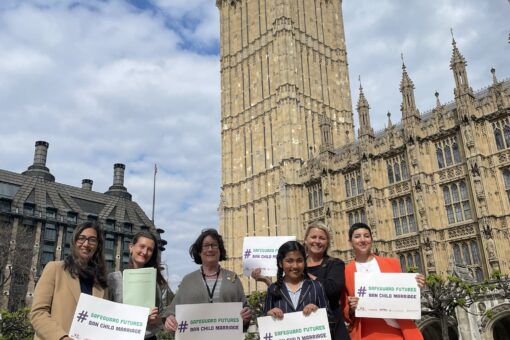 After ten years of campaigning, on the 27th April 2022 the UK government passed the Bill to end child marriage in England and Wales.

Child marriage has too often been viewed as a ‘developing world issue’ that doesn’t affect Britain. The reality is, Child Marriage is present in every single area of the UK. Since 2017 our National Helpline for Honour Based Abuse and Forced Marriage has responded to over 400 cases relating to child marriage. This does not even reflect the true scale of the problem, as it only shows the cases where victims have been able to reach out for support. Additionally, in 2018 alone the Office for National Statics reported that 147 children aged 16-17 were married in England and Wales- and this does not include non-registered religious and cultural marriages involving children in the UK.

Across the UK there are many laws that exist to ensure that children are protected from risk of harm. Children up to the age of 18 cannot vote, leave education, purchase fireworks and so forth. Yet they were not protected from child marriage, which often places a child at a significantly increased risk of domestic abuse, early pregnancy and compromises their emotional and intellectual development.

Prior to the passing of this bill, children aged between 16 and 17 years old only needed parental or judicial consent to get married. However, in our experience of supporting victims of child marriage ‘parental consent’ is often synonymous with ‘parental and community coercion’. Similarly, the previous laws failed to recognise that many children who are at risk of child marriage have been conditioned from early childhood from their families and communities to think that child marriage is something be desired and celebrated. Many statutory frontline workers have reported that some children feel stigmatised if they do not marry before 16. The previous laws failed to recognise the coercive abuse and indoctrination that have influences child marriage and makes children believe that getting married young is something to be desired and ‘celebrated’.

The new Bill will make it illegal for a person to arrange the marriage of a person under the age of 18 in England and Wales. This includes where a child from England and Wales is taken out of the country for the purposes of child marriage. The new law will automatically make any marriage that is arranged for a child under 18, on account of their age, a forced marriage.