We lobbied the government and, alongside many partners, we campaigned to make forced marriage a criminal offence. 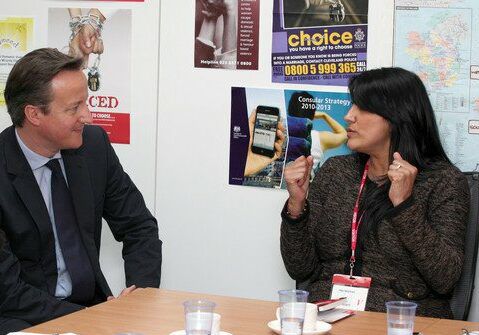 The Forced Marriage (Civil Protection) Act was introduced in 2007. However, it did not criminalise the act of forcing someone into marriage as a separate offence.

We lobbied the government on this for some time. And in 2012 a 12-week public consultation was announced. We grasped the opportunity to go out on to the streets, get public support and bring about meaningful change.

Through a postcard campaign, we gathered the views of the British people on whether forced marriage should be a criminal offence. An astonishing 99% of the population said yes.

On hearing compelling arguments from us, the public, victims and survivors, other charities and frontline agencies, the government finally announced that forcing someone to marry would become a criminal offence in England and Wales.

Separately, the charity Karma Nirvana conducted their own postcard campaign where they asked members of the public key questions on forced marriage. They received 3,000 responses which informed their response to the consultation.
REPORT

When did it become law?

Forcing someone to marry can result in a sentence of up to 7 years in prison.